How to use youtube-dl + mplayer to stream youtube video

In my last post, I explained how to use youtube-dl script tool.


My goal was to use MPlayer to watch Youtube videos on top of all opened windows.

So, I found some sites on Google that explains how to do it. And you can use with youtube-dl script.

First of all, make sure you have MPlayer installed. Check this post of how install MPlayer.

Then, go to Terminal and type:


Now, explaining mplayer. It's a powerful video player program. You can play, rip, convert,... Its arguments could be found here.

Then, youtube-dl. You can find in my last post, or google-it. For its parameters, you can find the explanation here. Basically, "-gf 34" means "using the URL, starts streaming H264 video in FLV container at 360p".

Just take care about Youtube Video ID and Cookies file path. Both are very important to play the video.

Sometimes, Youtube changes any part of its code and youtube-dl could not be working. It's recommended to update it by using "youtube-dl --update" 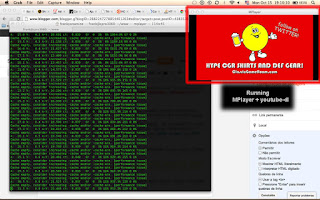 How to use curl + youtube-dl + mplayer to stream youtube video

Hello, I have a Macbook Air 2018 with macOS Mojave installed. For the development, I uses Windows 10 during my work time. There are many useful Unix/Linux libraries that can be used with vcpkg like GTK+ or CAIRO  on Windows 10. It saves my time during my tests. I'd like to have a similar environment on my Macbook Air. But I could not build vcpkg . Maybe an experimental library called c++fs is not available or it cannot be built for C++17 . Additional info, macOS uses Clang to build C/C++ programs instead of GNU GCC . I was researching on Google, many developers failed to build vcpkg and got similar build errors. So I decided to join the BETA program and install the beta version of macOS: Catalina . Besides of that, I installed the Command Line Tools for Xcode 11 Beta 6 . It is available in Apple Developer site. Finally, my environment is ready! So, go to the Terminal, clone the vcpkg source code and run the script: $ git clone https://github.com/microsoft/vcpkg